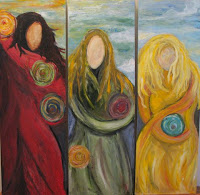 One afternoon, I went and raided Chris’s stash and found three perfect scraps of wood. When I think of the # 3 I automatically think of my boys and my sisters. I am the oldest of three and have three sons. I think of past, present and future. I think of morning, noon and night. That day, it seemed natural to paint the three sisters. To think of the colors they ‘represent” or perhaps the colors that represent them/me. To try to capture the the energy of the children we have brought into the world and now mother in the form of orbs. They needed to be able to be stand alone as well as work together, just as we do. I am so fortunate to have my sisters as not only a foundation but as closest of friends. I am so grateful for the love they not only give me, but my family. We joke (sort of) that our children have three mothers. I am much too protective of them and they graciously put up with me. In some ways we are so much alike and other manners extremely different. It is good to recognize, celebrate and remember as I raise my three sons. This Mother’s Day this piece will go to our Mom who is back in Virginia. She raised us with more grace and strength than I can imagine. Perhaps a new painting will be of her with us as the orbs of energy. Though that seems to be an undertaking I am not sure my heart can really capture.

I will never forget walking into the yearbook room and sitting in a big red leather chair was the cutest boy I had ever seen. Sun bleached blond hair, big green gentle eyes with endless eyelashes and a smile that stopped my heart. My gangly 14 year old legs quickly carried me back out to the hall for a private giggle and an instant NEED to know who the hell that boy sitting in there was. Stay calm Catherine. Be cool. Then he turned up sitting one table across from me and my sophomore peers in the lunch room. I could hardly wait for lunch and yearbook after school to see him. But of course, he played center on the football team and was dating a cheerleader. Damn. I couldn’t help myself though as they walked hand in hand down the hallways, I would look him square in the eye and just smile. The first time I felt the advantage of being tall. One afternoon, we were assigned a task together and a friendship began. An ease along with a spark and lots of laughter. Smiles were shot back and forth across the lunchroom, he bought me a Slurpee for my birthday.. only to find out his was the next day, we hung out at some basketball games with groups of friends (girlfriend was no longer in the picture!!) and I began to realize how very comfortable I felt around him. His gentle and playful personality shone brighter than those big eyes. Our school had a fundraiser around Valentine’s Day that matched people up from a computer (a novelty then) and he came and found me to tell me I was on the top of his list. Full on flirtation had begun. We casually caught some soccer games together. The smiles in the lunchroom became table visits instead of his disappearing out to Senior Court. We realized we had our last class across a courtyard and would sit by the windows flashing silly faces and signs. He would come watch me at tennis practice. One of the other girls that he had grown up with, went on and on about how annoying he was that he was there to watch her and how mad she was at him for this that and the other… some how managing to keep my mouth shut, I just smiled and felt giddy with my secret crush and new friend. Then the moment I had waited for. Walking me back to class from lunch, he asked if I would want to go out the following night. By some grace, I was able in a very collected voice say “sure, give me a call later.” I walked into English beaming and my friend who sat behind me and I whispered and passed notes the rest of class. It was so great to let my secret and my excitement out! Friday night when he picked me up we were both wearing pink Polo’s, acid washed jeans and our penny loafers….. honestly, it is a wonder. Anyway, we drove to the movies just talking endlessly. Decided on D.O.A., and then slipped into the dark theater. Eventually one of his pinkies reached over and locked with mine. Then all fingers danced across each other and we haven’t stopped holding hands since. Tonight is another Friday night on the 8th of April, though it is now 2011 and not 1988. And tonight, the two of us who held hands and first kissed each other 23 years ago are going on a date (no movie though.. time alone is much to rare to not talk, flash smiles across a table, hold hands and kiss). I know all those years ago neither of us would have imagined we would live 2000 miles from that little high school where we met, with three boys and life that has woven us together in a way that is rare and so very special. Looking back however, I can’t imagine it any other way. At some point, in a vulnerable moment, I once asked him “why me?” He replied, “your smile across the lunchroom. It was the best.” 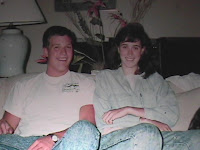 All of my boys, like most children love to find creatures, vehicles, you name it in the shapes of the clouds. The other day, Charlie began screaming that he saw Zadie,my adorable one year old niece. I asked, “Where?”- secretly hoping and wishing my sister had driven up for a surprise visit. He said “Up there in the sky. It’s Zadie Baby!” Sure enough, there was a perfect round cloud with a few wisps that look just like the new curls that fly off her perfect little face. It was so nice to “see” her that day.

About a year ago, my world turned upside down and inside out when my husband got a new job in a new town. We were living in our dream home, I had finally figured out the school/sport/art/music/friend balance for the boys (at least for a few years to come) and was beginning to get a good flow on the canvas and making time to paint. But we needed to go. Being self-employed had taken its toll in so many ways. The choice to go or stay wasn’t even really a question at that point.We needed this rope that had been thrown our way. But,it’s been a long year. I don’t handle change well and I don’t have any coping skills what-so-ever for goodbyes… seriously none. I knew home sickness would follow me for awhile and I am doing better than I thought… most of my friends would disagree, but I really am trying. I not only went to an arts meet and greet….. solo, but even applied for some art opportunities here. I got rejected.. ouch! But, at least I tried and it got me back to the canvas again. I began trying to paint the lake that is a few blocks from our home that I have fallen in love with. Seeing water every day really feeds my soul. I am fascinated how the colors of the water shift dramatically with the light and wind and as the landscape of trees and foothills that make up its backdrop, change through the seasons. I needed to start to feel familiar with the new canvas I now live in. I began painting the lake over and over. The first were “pretty” but stiff and boring. I was inspired by the beautiful fall leaves reflecting on its surface, but not able to transfer that life and depth I was craving. Frustrated, I put the paints down for awhile. Why couldn’t I find that flow I had before? The one where you loose yourself, feel high on the moment and time is completely lost. As I watched as the leaves disappear and the foothills become brown, the goodbyes I had put off and tried to ignore smacked me like the deep freeze that would soon hit the lake and take my breath away. The lake, though now frozen solid and surrounded by a white winter wonderland, brought me back to calm. It was stunning and then as if on cue, a beautiful Bald Eagle began to glide overhead almost asking me to join. “Look and see, Cat. Life is here.” I sat on the side of the lake in the bitter cold for almost an hour watching this magnificent creature. The balance of power and grace… inspiring. I stayed in my hibernation for awhile for many different reasons, but now feeling the hope of spring perhaps I will find that flow once more. I have begun again painting the lake I feel so grateful for. I have a feeling it will be a subject I return to over and over again as a way to check in with myself and find my footing. This latest canvas of the lake is beginning to feel more like myself and with a connection to place I so crave. There is the hope that before to many more seasons pass, perhaps it will even feel like home. 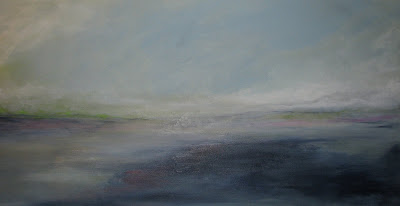 Long’s Pond 2011 2′ x 4′ Oil on Canvas – CDG
Fumbling around in the dark, I finally manage to wrap my paint thirsty fingers around my cell phone. I push buttons hoping to use it as a night light to find my way out of our bedroom. Not knowing just yet the layout of our new home in my minds eye, I feel along the hall and find my way downstairs in an almost frantic pace in order to get to my paints. I couldn’t wait to open them up and inhale the smell that is so familiar. As the palette fills with warm colors of golds and red and the soothing music of Greg Laswell gently wraps my heart, I can feel my body begin to fill with oxygen and a calm that I have been looking for all day takes over. I am then able to add some cool colors to balance out the color study. I ditch the brushes in the mirky water and begin to smear and dance my finger tips through the smooth aqua oils. Finally feeling somewhat connected to myself again, I watch images come and go, the movement turn from energized to serene. Perhaps now, sleep will come after all. Peacefully, I stumble upstairs ready to snuggle into bed next to my love.